The objective of this study was to assess the level of resistance of trimethoprim alone (TMP) with respect to E. coli strains isolated from the urines of women with simple acute cystitis in community.

Prospective study realized for 9 months in 2017–18. A total of 351 urine samples were analyzed. Culture has been made according to the usual techniques and antibiogram was carried out according to the recommendations of the CA-SFM.

Inflatable penile prosthesis surgery is relatively rare in France, and around ten surgeons perform most of this surgery.

The objective of this study was to define the learning curve concerning this surgery.

This study is a retrospective monocentric cohort of first time implantation of inflatable penile prosthesis between 2008 and 2016 in a university hospital. 68 consecutive patients underwent this procedure performed by a single surgeon. These patients were dispatched into two groups: a group of the first 20 patients and a group of the 48 last patients. For each patient, multiple parameters were measured including: duration of surgery, per operative complications, post operative morbidity according to Clavien classification, length of stay, and functional satisfaction. Parameters were compared using Fisher or Wilcoxon tests.

Patients were on average 58.2 year old and average operating time was 87.7minutes. The average complication rate was 16.2%. Five patients from the first group and 3 patients from the second group presented a grade 3 post operative complication according to Clavien classification. The complications included 5 infections, one erosion, one irreductible paraphimosis and a prosthesis dysfunction. This difference was statistically significative (P =0.043). The average duration of hospitalization was significantly shorter in the second group (P =0.004). There was no significative difference concerning the satisfaction using the EDITS score (P =0.52) or a Likert scale (P =0.72).

In this monocentric and retrospective study, the learning curve for first time implantation of inflatable penile prosthesis is acquired after 20 surgeries. Specific training could lower this number, but needs further evaluation.

Evaluate the concordance between the renal lesions biopsy's histology and the final histology of the surgical specimen according to histological subtype, and search for predictive factors of non-concordance.

We performed a monocentric retrospective study that included 156 patients suffering from a renal tumor that benefited a lesion biopsy before surgical treatment. Sensibility and specificity of the renal lesion's biopsy for histological diagnostic of the different renal tumors where calculated.

In renal tumor care, renal biopsy is a reliable testing. However, some factors most likely linked to the tumor anatomy (intra-sinusal tumor) and their histological composition were involved in the lack of non-contribution to the diagnosis.

Genetic factors must be considered in etiological diagnosis of urinary lithiasis. The aim of this study was to determine clinical, metabolic characteristics and the progression of hereditary urinary lithiasis in our patients.

A retrospective study was conducted between 2008 and 2018 and 60 patients were included. Patients were referred to our department from pediatrics departments to be followed-up in adulthood in 9 cases, for etiological investigation in 42 cases and for chronic renal failure in 9 cases.

Thirty-five men and twenty-five women were enrolled in this study with a M/F sex ratio equal to 1.4. The mean age at the time of diagnosis of the hereditary character of the urinary lithiasis was 28.6years (3months–63years). The average delay between the onset of the lithiasis disease and the etiological diagnosis was 8years (0–42years). We noted 31 cases of cystinuria, 18 cases of primary hyperoxaluria type 1 with two mutations (I244T in 14 cases, 33-34 Insc in 23 cases) and 11 cases of renal tubulopathy. Fourteen patients were affected with chronic renal failure, of which five were in the end-stage renal disease. Crystalluria was positive in 62% of cases. The morpho-constitutional analysis of stones was performed in 37 cases and it contributed to the diagnosis in 29 cases. After an average follow-up of 16years, we noted normal renal function in 42 cases, chronic renal failure in 7 cases, hemodialysis in 10 cases all with primary hyperoxaluria and transplantation in 1 case.

The etiological diagnosis of hereditary urinary lithiasis in our study was made with considerable delay. Cystinuria was the most frequent etiology and primary hyperoxaluria was the most serious affection.

A survey was addressed to 1127 GP of the “Bourgogne–Franche Comté” region before the new CCAFU's guidelines publication.

93 practitioners responded, giving a response rate of 8.3%. Eighty GP (86%) responded performing prostate cancer screening. The main means used were the assaying of PSA alone (23 practitioners, 28.8%) or the combination of PSA dosage and digital rectal examination (36 practitioners: 45%). It should be noted that 31 practitioners (39%) did not perform digital rectal examination as part of prostate cancer screening. Thirty two physicians prescribed pMRIs (34.5%.) before any urological consultation. The main indications were several abnormal PSA assays (27 GP, 84.4%) and/or suspicious rectal examination (15 GP, 46.9%). The main reason of this prescription was the gain of time for patient or urologist. Screening was carried out independently of the demographic characteristics of the physicians interviewed. Similarly, the prescription of prostate MRI was not related to the achievement of prostate cancer screening or the screening methods used.

It seems that the prescription of pMRI has already become part of the prescribing habits of a number of general practitioners.

Monocentric, retrospective study of 161 patients from November 1988 to February 2018 in a single French University Hospital, having undergone radical prostatectomy with positive lymph nodes on pathology. For each patient, preoperative data (age, clinical stage, biopsy results, d’Amico classification) and postoperative data (pathological results, number of lymph nodes removed, number of positive lympnodes, recurrence free survival, specific survival and overall survival) were collected. The date of introduction of hormone therapy was noted and survival without hormonal therapy was established according to the Kaplan Meier curve. The pre- and post-operative oncological factors that could influence hormone therapy introduction were investigated with Chi2 and Student tests (statistically significant when P <0.05).

Lymph node invasion is a factor of poor prognosis after total prostatectomy and leads to introduce hormone therapy. Our study identified the percentage and number of positive lymph nodes as factors that identify patients who may be delayed in introducing this hormone therapy.

Objective of the study to carry out a retrospective multicentric evaluation of the efficacy of male slings in the management of mild and moderate urinary incontinence after radical prostatectomy.

We performed a multi-center study that included all patients with mild to moderate urinary stress incontinence after radical prostatectomy with adjustable slings or four-arm slings. We collected the number of protections before the procedure and one year after the application of the male sling.

This multicentric retrospective series confirms that male slings are a usefull therapy for patients with mild or moderate urinary incontinence.

To study the characteristics and health care utilization of men with prostate cancer (PCa) during their last year and last month of life, as these data have been rarely reported to date.

Men covered by the national health Insurance general scheme (77% of the French population) treated for PCa (2014–2015), who died in 2015 were identified in the national health data system, including reimbursed hospital and outpatient care, and their causes of death. 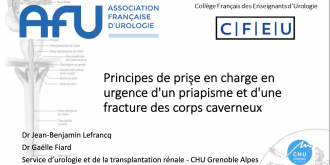